AUTUMN EQUINOX IN THE GARDEN

Summer has sadly slipped into autumn and hit us hard here in the West Country with a rain and a cold, cold wind after several days of glorious sunshine when we enjoyed lunch and tea outside on the patio.  Coffee indoors today. What a contrast!

Autumn this year in the garden began to show several weeks previously when we were still in late August, its arrival heralded by cyclamen coum appearing, their white and pink flowers peeping out amongst the foliage and flowers of crocosmia and salvia. A few days later, the first blue blooms of the creeping plumbago opened, now a swathe of blue climbing over the kitchen bed. Both these plants indicators that the weather and season were on the change. 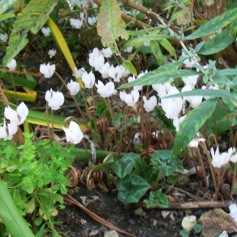 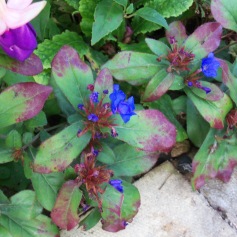 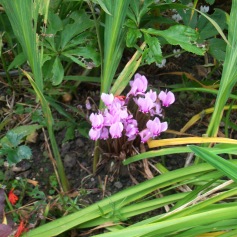 Amongst the pot of alstroemerias and heuchera by the fence, I spied a white flower of my Hellebore Niger–the Christmas Rose in bloom yet again, with more buds about to open. It had flowered all winter, again in early summer, and here it is announcing itself once more.

Of course, flowers blooming when they shouldn’t, out of season and out of kilter, is nothing new, not in my garden or in anyone else’s. It’s what they do. Mother Nature blossoms when it wants to, when it feels the temperature and conditions are right. This is particularly so with my red rhododendron. It always performs beautifully in May, and again in October, admittedly not as prolific as its spring show but there nonetheless. This year, however, it’s in flower now, in late September, beneath it primulas which flower most of the year where they are in constant shade.

A stroll around the garden this morning, despite the cold wind but in bright sunshine revealed many summer plants are still flourishing. A clematis and my “Black Night” buddleia, begonias and third flush of roses. There are poppies, field and Welsh, along with alstroemerias, fuchsias, bright marigolds, and my beloved perennial foxglove “Firebird” still on display amongst the cosmos (always great doers in autumn) in full flower, as is my favourite dahlia, the Bishop of Llandaff and my sedum Mr Goodbud.

I’ve also a second flush on the phlox. Once the first flowering has finished on these, I cut each stem back to about half, give them a good feed and watering, and invariably get a second show. Nowhere near as prolific as the first summer stems, but colour and perfume for a second time, prolonging their season. They are certainly worth the attention. Phlox are thirsty plants and need almost daily watering in summer or else the leaves quickly go brown and yellow and wilt. But the plant will survive and return next year, regardless. 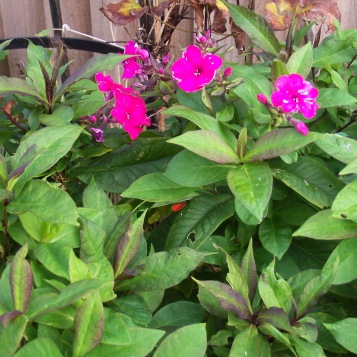 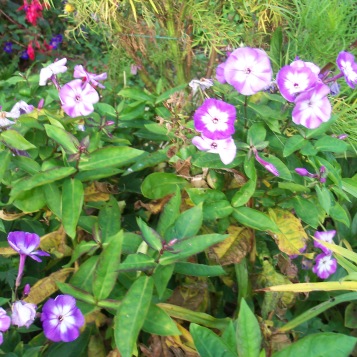 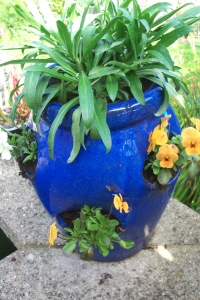 Most of our hanging baskets and pots are looking a little sad at the moment. Those that have gone over we’ve already planted up with winter pansies and violas, wallflowers and bulbs for the spring. We will slowly work our way around them all putting the majority to bed for the winter, taking cuttings and collecting seeds as we go.

In some ways, it’s a sad time in the gardening calendar, but it’s also one in which to look forward to next year. We’ve already sent away for our seeds/plants and bulbs although throughout the next few months we will be scanning the catalogues for more. There’s always room for more. It’s also the perfect time too to sit back and assess the success and failures of this year’s planting. Deciding what works, what doesn’t, what needs to be moved and to where and what we would like to see next year. Every plant in Kit’s Garden must earn its place, be it with colour, perfume, profundity and beauty. If a plant lets us down, we give it two more chances. Fail again, and out it must go. 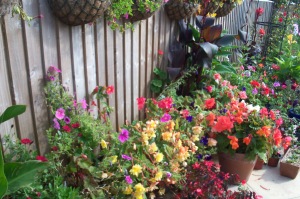 That said, I have a clematis, no idea which one it is, although memory serves it is a spring “Montana”. All I remember doing several years ago was planting it in the hope it would spread over a border that often looks bereft of flowers. It never bloomed, never flourished, in fact I forgot about it until clearing the bed last autumn. I moved it to another place, hoping it would climb up a pergola, which it did this year, but again no flowers. So we pulled it out and planted some spare plants there for this year. Low and behold, this clematis has sprouted from a root we must have missed and has covered the pergola and swamped out the other plants there already within three months. I will leave it and see what happens next spring. No flowers then out it goes again, and this time we shall make sure we dig out every little bit of root. I already have in mind what I want to grow there next year. Just in case.

Happy gardening until next time from Kit’s Garden.

This site uses Akismet to reduce spam. Learn how your comment data is processed.

All photographs within this site are the property of Kit Domino/Kit Domino’s World/Kit’s Garden and subject to copyright.